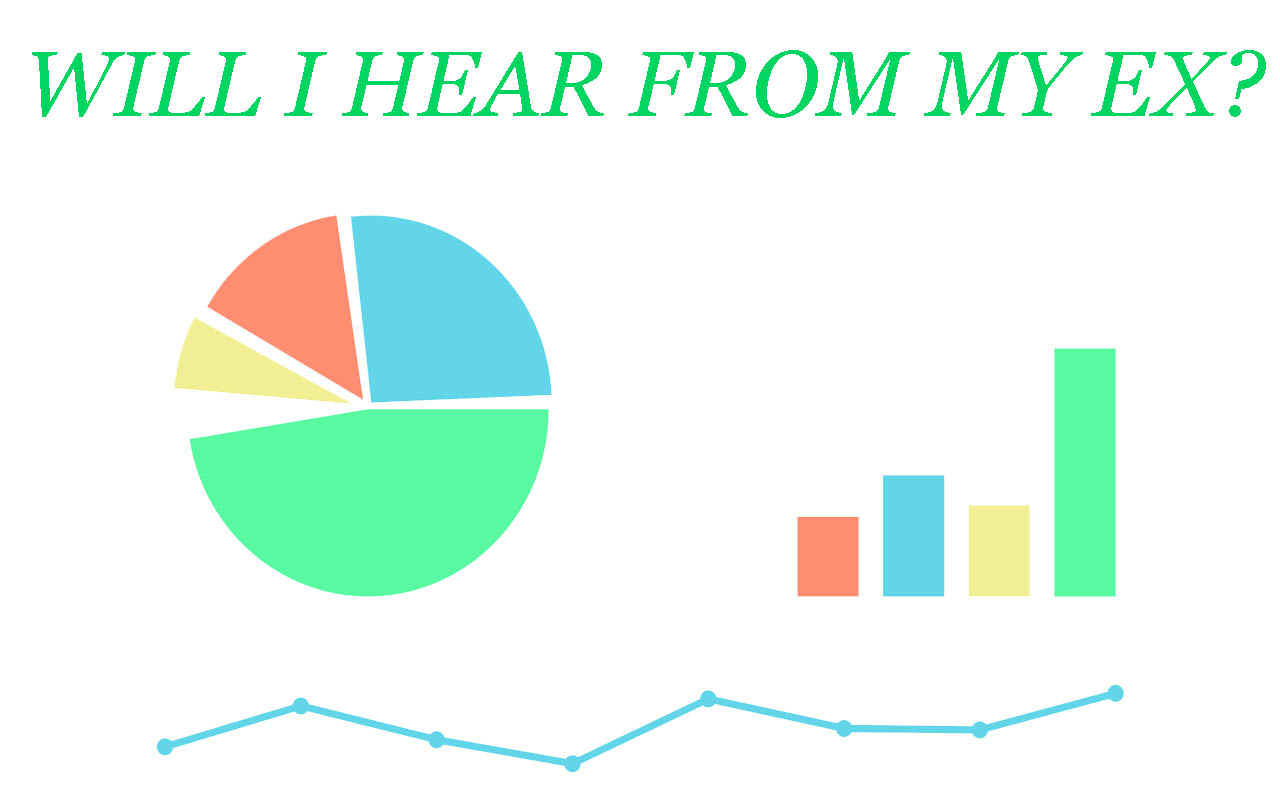 If you’re wondering “will I ever hear from my ex again,” I may have some good news for you.

I have conducted a survey from my past clients and asked them how long it took their exes to reach out.

I also spoke to dumpers, looked and browsed through various forums and conversed with dumpees from all over the world to provide the most accurate information I possibly can.

In my research, I excluded cases where ex-partners live or work together, or are forced to break no contact.

I also excluded cases where dumpers were forced to collect their belongings or had other unfinished business with the dumpee.

To my astonishment, it didn’t take incredibly long for dumpers to reach out. It’s only the anxiety that haunts dumpees and makes them feel as if their exes will never reach out.

Heartbroken dumpees are incredibly terrified of never hearing from their ex again.

They are so caught up in a negative thought spiral, they honestly believe their ex will never reach out.

But this is more often than not far from the truth and you will find out why. That said, let’s get to it.

How long does it take for dumpers to reach out?

The time it takes for exes to reach out varies for each individual.

It can take them anywhere from a day to a few years. In some cases, dumpees will never hear from their dumpers again.

But fortunately, the odds of that happening are small. If you’re one of those people that doesn’t ever get contacted, allow me to explain why it may not be such a bad thing after all.

When your ex doesn’t reach out to you, he or she essentially gives you the golden opportunity to heal and improve yourself.

Your ex doesn’t leave you with breadcrumbs, the “what ifs” and endless self-torture and doubt as to whether you’re doing things right.

The topic of this article scares many dumpees beyond belief. Many are so frightened they truly believe they will never hear from their exes again.

So if you’re one of those dumpees, you mustn’t be afraid and anxious as it really won’t change anything.

Let’s now have a look at the statistics I have gathered.

As you can see from the chart above, I have conducted research with 108 dumpers. There’s no denying that each and every person is different. That’s why it took some dumpers longer than others to reach out to their exes.

One of the most interesting parts of my discovery is that a lot of dumpees (14.8%) got contacted before the end of the first month. The following month, chances of exes reaching out decreased by 50%, dropping down to 6.48% per month.

Many dumpers reach out to their exes shortly after the breakup to see how they react.

Dumpers wish to discern whether their dumpees are extremely hurt, jealous, insecure, angry or perhaps unaffected.

In some more rare breakups, dumpers are still a bit connected to their dumpees and will reach out for a casual conversation.

These conversations are usually completely irrelevant topics that can quickly turn into heated arguments.

Although it’s not included in my research statistics, exes oftentimes ask for their belongings back before the end of the first month or shortly after. They do so directly or indirectly through another person, such as a friend.

According to my survey, dumpees’ chances of hearing from their exes were the highest in the first half of a year.

After the initial 6 months, the number of dumpees getting contacted by their exes started descending. The percentage fluctuated at around 3.3% per month until the “years later” mark.

If we take into consideration only the first 12 months, a total of 86 dumpers broke no contact and contacted their exes after 7.16 months on average.

Based on these statistics, you will also likely hear from your ex-boyfriend or ex-girlfriend in the first 6 months.

If you don’t, be patient and give your ex more time.

What are the chances my ex will reach out?

Dumpees are initially petrified of never hearing from their exes again.

The thought of being abandoned and forgotten hurts them greatly. Their overanalyzing brain desperately looks for signs their exes still love them.

And if they don’t receive any clues, they honestly believe they will never hear from their ex-boyfriend or ex-girlfriend again.

I don’t want you to panic. That’s why I have done the research for you so that you have a clear indication of how many people actually hear back from their exes.

It doesn’t matter if your relationship was horrible and if your ex accused you of the craziest things you can think of.

Breakups are almost always kind of wicked, so keep that in mind.

According to my research, on average, 9.2% of dumpees will never hear from their ex again in the future. This coincidentally implies that the chances of your ex reaching out are 90.7%.

90.7% is a good possibility! Don’t let anxiety get to you while you are “waiting” to hear from your ex.

Expecting quick results or hoping that your ex reaches out by a certain date is only going to prolong your pain and suffering.

The odds are in your favor!

To round it up, we can confidently say that every 10th person is not going to hear from their ex again. In my humble opinion, it’s honestly not that bad!

Knowing what your chances are with your ex, likely won’t make you feel much better.

Your brain is still going to overanalyze and come up with excuses, such as; “my ex has an avoidant attachment style, he seems too happy to ever reach out, she said she doesn’t keep in touch with her exes,” etc.

I know you’ve got your own reasons to believe you will never hear from your ex again, but how many times do people actually stay true to what they say?

Your ex probably promised you that he or she would never leave you, right? I’m sure you can think of many other promises your ex failed to fulfill.

People are emotional beings and often say things in the heat of the moment.

As exes go through various dumper stages, they begin opening new chapters in their lives.

They experience all sorts of emotions from exuberant elation to despondent nostalgia.

Will I hear from my ex again in the future if I begged and pleaded?

It goes without saying that post-breakup mistakes will only push your ex further away and delay the time it takes for your ex to reach out to you.

Depending on how long you begged and the number of insecurities you displayed, your ex could need some time to recover.

Although I cannot speculate how much begging for attention is over the top, there is always a point where it becomes too much to bear.

That means that your post-breakup image (which is already bad) becomes even worse. And for your persona to change for the better, your ex will need a lot of time.

From my observations, if you pestered your ex for a month, two or three, it usually takes at least half a year to get unblocked or contacted again.

Don’t expect your ex to come out of his or her hiding any time soon if you begged too much. Time will change things for the better probably when you’ve forgotten about your ex.

It’s been a year. Will I ever hear from my ex again?

Chances of hearing from your ex years later are almost as high as hearing from him or her in the first month.

Quite frankly, they are 11.1%. You are probably in a lot of pain right now, so you likely won’t believe what I’m about to say.

You don’t want to get back together with your ex before 4-6 months have passed anyway.

To be on the safe side, I would say there should be a break at least twice as long (1 year or so).

The reason for that is because nothing is going to change if you get back together with your ex.

You will remain needy and insecure, underdeveloped as a person and most importantly, your ex will stay exactly the same.

Not only will he or she remain exactly the same, but your ex will also take you for granted much quicker the second time around.

If you get back with your ex too quickly, you will end up resuming your romantic relationship, instead of starting a new one.

And as you know, resuming something that has failed is very likely to fail again. Your ex would possibly take you for granted for getting back together again and leave you when past behavioral patterns repeat themselves.

Chances of a successful reconciliation increase with time and not vice-versa.

Exes come back on their own terms for their own selfish reasons. This implies that they will likely return when you are over them and stopped thinking about them altogether.

To be completely honest, the most successful reconciliations I’ve seen are the ones where ex-couples spend years away from each other.

And there’s a good reason why they work best.

When couples reunite, they completely or mainly forget about each other’s flaws and quickly bond again because of nostalgia, history, inside jokes, etc.

For that reason, some couples describe their reconciliations as “it’s as if we never broke up.”

Will I ever hear from my ex again if I told her to leave me alone?

Just because you’ve told your ex this or that, doesn’t mean you won’t ever hear back.

Your ex is not staying away from you because of a rational reason, but rather an emotional.

So to turn this around, all your ex has to go through is something emotional or incredibly difficult.

Just how you have difficulties staying away from your ex, so will he or she when things get tough.

When your ex’s circumstances finally become difficult and he or she processes the breakup, you will probably hear from your ex.

This is true even if you’ve told your ex to leave you alone or to message you only if he or she changes his or her mind about the breakup.

Don’t let the fear of not hearing from your ex weigh you down.

You may really want to get back together with your ex but the fear and anxiety don’t have to control your life.

I understand you may feel lost after the breakup and might be experiencing a loss of identity.

But try to dedicate your spare time to activities and people that make you feel valued. Basically, do whatever you can to give purpose to your life and I promise that the fear of never hearing from your ex will slowly dissipate.

When your ex reaches out to you, it won’t necessarily mean that he or she wants to get back with you anyway. Your ex could contact you just to feel the waters, alleviate his or her guilt, and eventually disappear again.

Are you still worried about whether you will ever hear from your ex again? Now that you know what your chances of hearing from your ex are, do you feel at ease? Tell us what you think by commenting below.

101 thoughts on “Will I Ever Hear From My Ex Again? Statistics Look Good!”