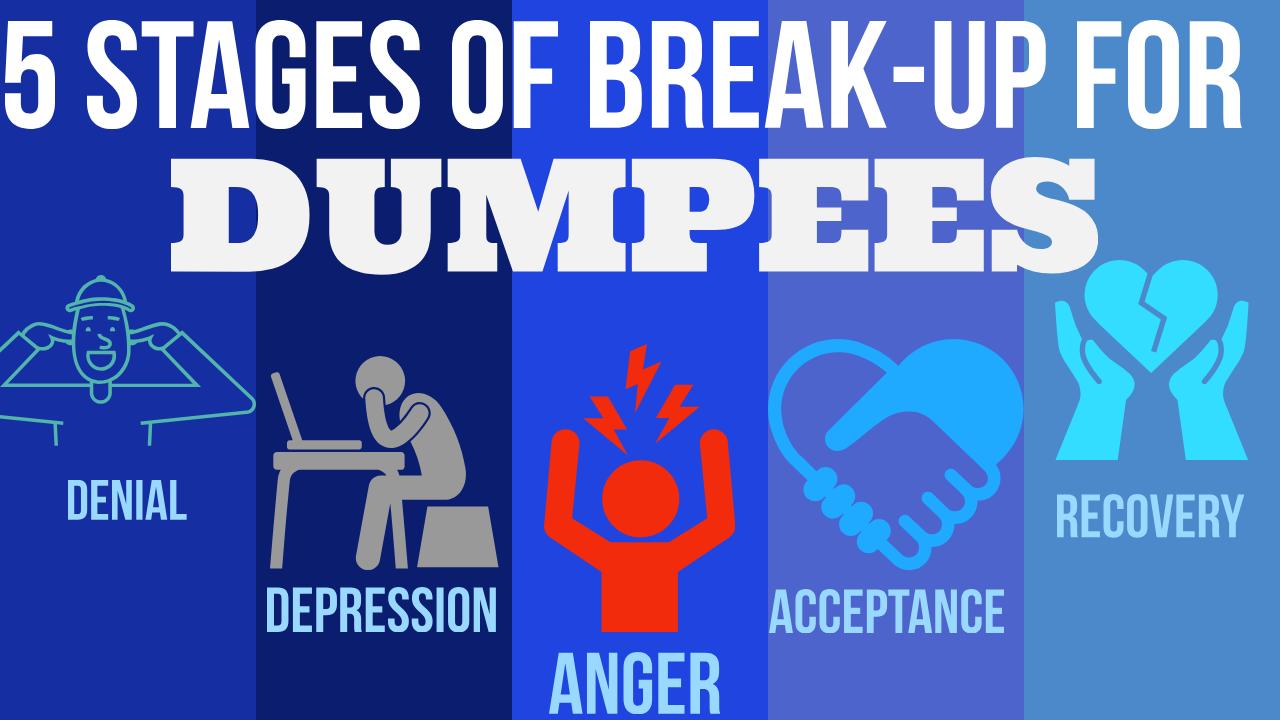 Here are the 5 stages of a break up for the dumpee. They are truly the worst thing human beings have to experience.

Separation anxiety is tough for most people, especially for those who tend to seek validation through others. It stems from childhood when we started developing different styles of attachment.

The order of the 5 stages of a break up can sometimes vary and jump back and forth. Just when we think we are passed a certain stage, we slip back into the previous one.

Please note that this is completely normal. There are days when certain events remind us of our ex-partner and bring out all sorts of emotions.

This initial stage after the break up comes as a shock to the dumpees because dumpees refuse to accept reality for what it is. This stage can last anywhere from one day to a week.

During this time dumpees keep telling themselves, “She didn’t mean it, she’ll be back, she’s just having a bad day…” They enter this state of denial in which they protect themselves from future pain and sorrow.

After the dumpees have come to the conclusion that the break up is indeed happening, emotions take over, and they often lower their self-esteem by begging and pleading.

The dumpees then use logic and reasoning to win back the hearts of their loved ones—but to no avail.

The dumpers have already made up their mind days, weeks or even months before the break-up, but never found the courage or the right time to pull the trigger.

They intend to stick to their decision which makes it impossible to talk them out of it.

In fact, the more the dumpees attempt to reconcile at this stage, the angrier and frustrated the dumpers become.

Ideally, this is the time to tell them that you accept the break-up and never look back.

You should also consider removing any reminders of your ex by storing them in a box and moving them out of your reach.

One of the worst stages of a break up for the dumpee is the depression stage, during which dumpees experience extreme melancholia.

This stage can last from the moment they accept the break-up up until several months later. It really depends on each individual and how much they invested in the relationship.

This can be a very difficult stage for a lot of people. If you can’t break free from depression even months after the break-up, I suggest that you seek professional help.

Some of the symptoms of depression are lack of sleep, loss of appetite, no motivation, negative thoughts.

Separation anxiety can take a huge toll on the dumpee and make him say and do things out of desperation.

It’s an ugly sight to the dumper as it typically ends up repulsing the dumper further. The dumpee then starts to think about what he could and should have done differently.

During the depression stage, dumpees relive the break up a million times and ruminate about the positive aspects of the relationship.

As a result, they put their ex-partner on a pedestal and think about the dumper as the one and only. Because of such perpetuating thoughts, they raise their ex’s value and reduce their own.

Obsessing over an ex is self-destructive and will lead to a lot of anxiety.

That’s why it’s very important that you find your passion again and live life as if your ex never existed.

Now is the time to reflect on the broken relationship and identify the relationship killers that plagued your relationship. Correct your shortcomings, get out of the comfort zone and strive to become the best version of yourself.

Depression and anger sometimes go hand-to-hand. While the dumpee is going through the grief stages of a break-up, unwanted emotions can often hinder the recovery process.

There are times when the dumpee gets angry at his ex for putting her through a very difficult situation. The dumpee may directly call the dumper names or belittle him to her friends and family.

Needless to say, it’s very counter-intuitive, especially if the dumpee wants to get back together in the future.

I suggest that you implement different relaxation techniques to reduce stress and anger before impulsive actions completely destroy what’s left of the relationship.

Don’t become vengeful, plot revenge and make the dumper regret ever getting involved with you.

It might make you feel better at first, but you will without a doubt regret your actions later down the road.

Remember that karma will get your ex on its own without your intervention.

A few months after the initial stages of a break-up, the dumpee will have completely accepted the break-up and notice the negative parts of the past relationship.

He will see his ex for the person she really is. When the dumpee accepts reality, he begins to stop blaming himself for the demise of the romantic relationship.

He no longer sees his ex through rose-tinted glasses and might even be glad that the relationship has come to an end.

The dumper was the one who decided to quit on the dumpee, so the dumpee discerns that he deserves more than what the dumper did and could provide the dumpee with.

During the recovery stage, dumpees’ lives become independent of their exes’. As the negative emotions subside, dumpees think less and less of the dumpers.

Time apart allows them to heal properly and find happiness in themselves and others. They focus on their own hobbies and ambitions.

Life becomes fun and exciting again because they see the light at the end of the tunnel. This is normally the time when dumpers take notice of the dumpees’ new profound happiness and reach out.

Sometimes dumpers contact their exes just to see how they’re doing so that they can boost their ego and relieve their guilt.

There are also times when they reach out just to see whether their dumpee still loves them and if it’s safe to come out of their hiding.

Here’s what getting over the break-up time frame looks like for the dumpee.

Check out the 5 stages of a break up for the dumper.

Have you gone through these stages of a break up for the dumpee yourself? Is there anything I left out? Share your thoughts with us in the comments below.