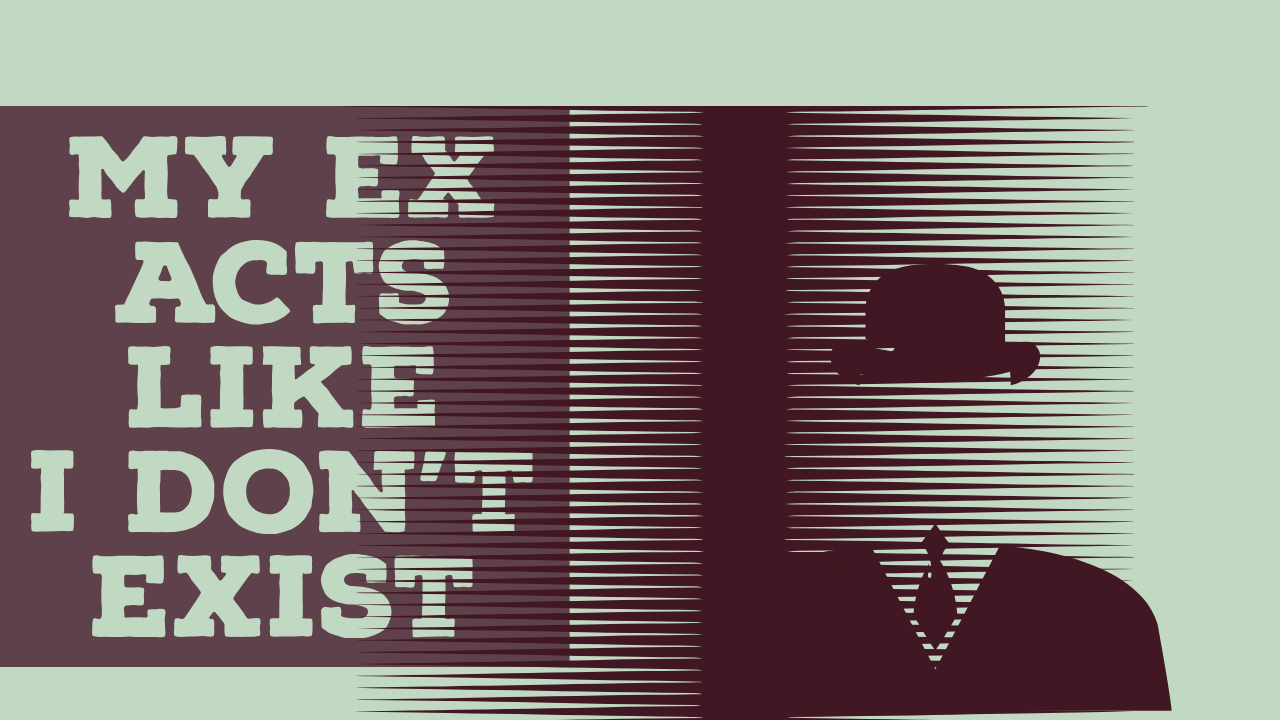 It’s not unusual for an ex to act like you don’t exist. If you happen to see your ex in public and he completely ignores your existence, you’re probably wondering what’s going on.

Surely he must have a reason for avoiding eye contact and looking at the ground as if there is something there. What are the odds of him looking for his lost keys or wallet?

Both you and I know that’s not the case.

When your ex pretends not to see you and walks right past you, a few questions probably begin to pique your interest.

You likely begin to wonder things such as, “Why does my ex act like I don’t exist? Why does he behave like our long-term relationship meant nothing to him? Did I do something wrong for him to hate me so much?“

In this article, we will try to clarify why exes behave like they don’t know us.

Why does my ex act like I don’t exist?

If your ex acts like you don’t exist, I want you to know that it has nothing to do with you, but rather with his perception of you.

The way your ex acts toward you post-breakup is determined completely by his behavioral patterns developed long ago.

If your ex doesn’t know how to deal with difficult situations, he will project his lack of maturity onto you and act in a way that seems the most logical to him.

The most reasonable way for your ex to react to an unpredictable situation is not to react at all and avoid it altogether.

Most people do this so they don’t have to deal with it.

If a relationship represents a tight bond between a couple, then the breakup depicts the distance – a strong need for space and time.

Dumpers undergoing a breakup suffer from a strong urge to be left alone. I call it the craving for space syndrome.

Because the dumper desires to separate himself from the dumpee so badly, he doesn’t want any communication with his ex (verbal or non-verbal).

This includes eye contact, talking, and even something as waving to his ex.

Dumpers oftentimes feel incredibly uncomfortable engaging in social interactions with their exes, whilst dumpees, on the other hand, feel extremely scared and needy for validation.

Furthermore, both dumpers and dumpees act differently toward each other post-breakup. At first, the dumpee seems to be very disinterested and the dumper appears pretentious.

But unfortunately, it’s quite the other way around.

The dumpee is the one pretending not to care about her ex-partner and the dumper is typically the one who truly doesn’t care.

Why is my ex acting like we never dated? I did so much for him!

It’s not that your ex isn’t appreciating what you did for him. It’s just that the situation has changed—and so have feelings.

The way your ex felt about you in the past is different from the present. Just how your taste in music and food can change and adapt, so can your partner’s thoughts and feelings about you.

Here are the most common reasons why people change in relationships.

These are the 6 most genuine reasons why people change in relationships. It’s not just drifting apart as often depicted in the media.

The explanations for separation are often way more complex than that. You just have to be willing to dig a bit deeper.

Usually, people start taking each other for granted and lose respect for one another. Depression and low self-esteem are often very good examples of such cases.

It goes without saying that anyone who leaves a depressed person usually does so because he or she feels dragged down.

As we mentioned in the infographic above, the dumper loses feelings and breaks up because he lacks self-awareness and simply reacts to what the dumpee is projecting.

In our case of depression, the dumpee could portray negativity, lack of confidence and self-esteem, a loss of long-term goals and selfishness, and in general—unhappiness.

The dumper will put up with it for as long as he can. Day after day, he will resist and try to reason with himself until he feels emotionally depleted and needs to ask for space for his own good.

This is the sad truth about depression—which often makes couples break up.

My ex promised me we would stay friends if we broke up!

If your ex promised you unconditional love, friendship or the world—and he failed to deliver, here’s a nugget of educational wisdom from me.

What a person promises you at his best, doesn’t mean he will provide at his worst.

Breakups are great examples of this thesis.

Think about it for a second. Just how many times has your ex actually made a promise when he was at his worst? My guess is not many times.

When he did, he probably promised to pay more attention to his behavior—which he most likely failed to improve upon anyway.

The point is that people like giving promises because they provide immediate content and a sense of security.

Through promises, they express regret and at the same time, give reassurance that something will or will not happen again in the future.

Regrettably, this doesn’t apply to breakups as feelings always change tremendously. And when they do, the person who once promised you great things will no longer feel compelled to fulfill you.

If we can be direct about this, it’s because he doesn’t want to anymore.

Your ex’s repelling emotions are responsible for his lack of care, hence why he isn’t interested in exploring friendship at this moment.

His feelings might change in the future, so the best you can do for yourself right now is to be friends with the people who deserve your attention.

When will my ex start paying attention to my existence?

As you already know, your ex acts like you don’t exist because of his overwhelming emotions.

So for him to start valuing you as a person again, the following circumstances must occur:

Your ex won’t act like you don’t exist forever if you stay in indefinite no contact. This is because anger doesn’t last forever.

It’s possible to hold grudges for a long time, but to stay furiously angry at someone because of the breakup alone is very unlikely.

If a person stays enraged at you for years or decades, I would really pity his mental state and probably be glad to be out of his life.

That said, don’t wait for your ex to have an epiphany and go through some phase of self-discovery.

Nobody knows when that will happen, so the best you can do is to heal, learn and move on as quickly as possible.

If your ex doesn’t treat you like a ghost but actually acknowledges your presence and acts as if nothing happened, then you, my friend got stuck in something dreadful.

This painful experience can feel as if you’re stuck in quicksand up to your neck.

Since you are immobilized and incredibly perplexed by your ex’s happiness, you don’t know what to say or do next to get your ex to care about you again.

To put it in more familiar terms, you’re stuck in the friends zone.

Welcome to the friends zone!

Now that you’re here, you may as well get comfortable with your unfortunate situation and accept it for what it is.

There’s no point in trying to change your ex’s opinion of you right now because he’s far from seeing you as his romantic partner. Your ex likely thought long and hard about his decision before he finally detached himself and broke up with you.

Now that he’s completely over you and has no harsh feelings toward you, he sees you as a friend—a person who he would share his good and bad moments with.

You may think it’s difficult for you when your ex acts like you don’t exist, but that’s a cakewalk compared to what getting stuck in friend zone feels like.

Hearing your ex talk about his new girlfriend, sexual adventures and his happy life is an emotional equivalent of a stab to the heart to you as a dumpee.

Heck, a knife to the chest would probably be a joke compared to the emotional agony you would have to go through if you had to listen to your ex’s new dating life.

Save yourself the pain and retreat to your safe zone instead. The synonym of the safe zone is called no contact.

It’s your best friend as well as your savior when your ex acts like you’re best buddies and refuses to give you another chance.

Ultimately, the decision is up to you. You can spend months and months trying to find a secret pathway back to his heart or you can finally begin to heal and move toward something that serves you better.

I hope this article has answered your question, “Why does my ex act like I don’t exist.” If it did, leave a comment.

6 thoughts on “Why Does My Ex Act Like I Don’t Exist?”