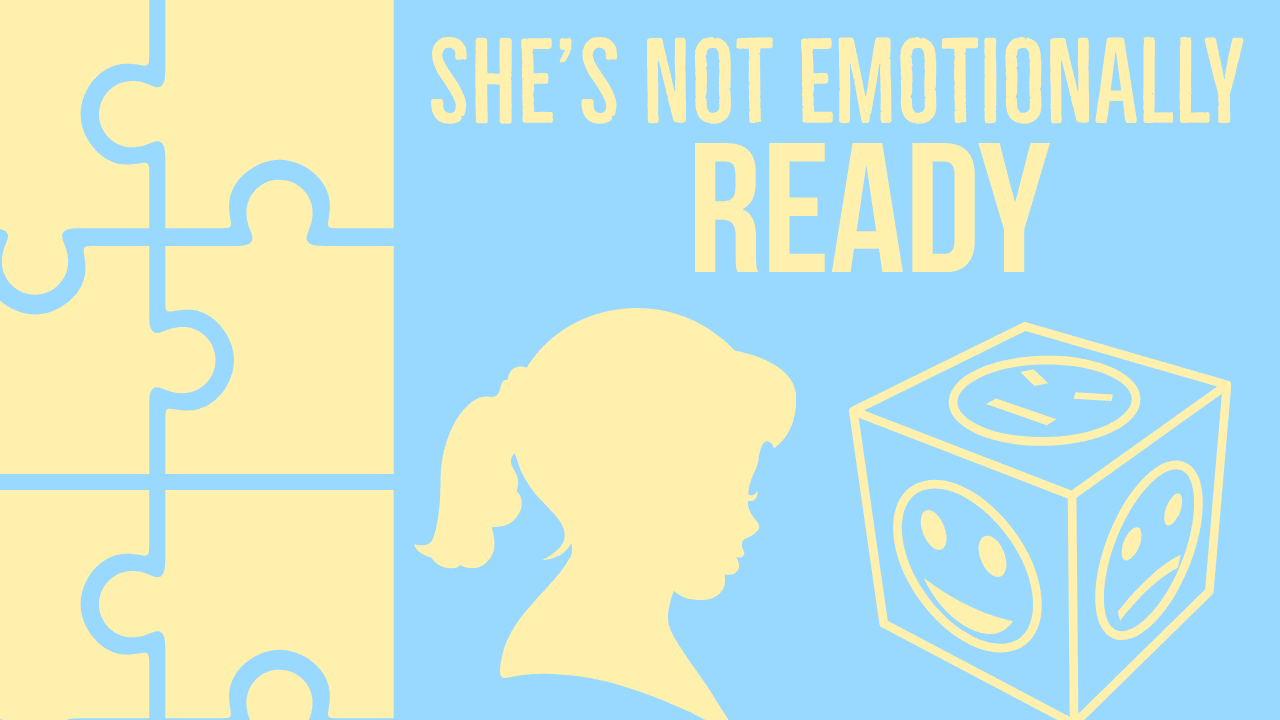 When a girl says she’s not emotionally ready for a relationship, you should listen to her. She’s trying to warn you that getting involved with her is a bad idea and that it’s going to have catastrophic consequences.

It’s going to make you (the more attached person with higher expectations) regret investing in her and leave you upset. You might even experience the fear of abandonment and separation anxiety. It really depends on how invested you are in her.

If you’re very invested and you love her to bits, you’ll most likely suffer. You’ll feel unpleasant feelings of rejection and as a result, want her to love you even more.

And if you’re not that invested in her as you haven’t had feelings for her for a very long time, then you’ll likely take it to the chin and accept her decision. You’ll be okay with her rejection and focus on finding someone who will want to be with you.

That’s why a girl who tells you she’s not emotionally ready is actually being very honest with you. She’s expressing to you that her mentality and feelings are off and that she isn’t able to give and receive love.

She can’t because she isn’t in a place to do so. She’s somehow stuck in the past, pondering over one of her recent relationships. Maybe even two if she got in a rebound shortly after her breakup.

The indisputable truth is that if a girl tells you she’s not emotionally ready, she really means it. Something didn’t turn out the way she’d imagined, so she now needs time to process her failures and regain her independence.

Her love tank is unfortunately empty and she can’t refill it no matter how endearing you are and how much you love her.

Whether you’re a man or a woman, you, therefore can’t make this girl fall for you because she doesn’t:

She may feel attracted to you and likes you as a person, but she definitely can’t be with you until she lets go of the past that haunts her and regains her faith in relationships.

This article is for those romantics who’d met a girl or a woman who says she’s not emotionally ready for a relationship.

She says she’s not emotionally ready for a relationship yet

If you want a relationship with a girl who tells you that she’s not ready for one, it would be extremely wise not to push the girl against her will and coerce her to commit to you.

Not only would such needy actions make you look selfish, insecure, and possessive, but they’d also tell the girl that you don’t really care about her inability to reciprocate your feelings.

They’d tell her that all you care about are your feelings and that her feelings, suggestions, and ideas don’t matter the slightest.

And when she comprehends that you don’t care about her feelings, she’ll refuse to give you what you want and instinctually push you away and distance herself from you.

She’ll do this out of suffocation and self-respect—and likely start making excuses not to see you and go out with you. How she treats you strongly depends on how much much you smother her and what she’s like as a person.

For example, if she’s the impulsive type, she’ll probably remove you off social media and block you. She’ll do anything to protect herself from being forced to overinvest in you.

On the other hand, if she’s in control of her actions and reactions, she’ll likely respond maturely and keep you at a distance nonetheless.

There’s no telling what a smothered girl will do because every person’s different. But one thing that’s certain is that she’ll lower her romantic respect for you and feel even less attracted to you than before you attempted to win her over.

So try not to pull off a grand romantic gesture because (as she said) she’s not emotionally ready for one. If she were ready, her words and actions would depict affection for you.

She’d appear receptive to relationship topics and would likely express the desire to get to know you and commit to you.

If you’re wondering, “Why isn’t she emotionally ready for a relationship,” this picture will provide you with some information.

What to do when she says she’s not emotionally ready for a relationship?

Now that you know what not to do if she’s not ready for a relationship, let’s look at the things you should be doing.

First and foremost, give her space and freedom to be in charge of her life. As simple and self-explanatory as that may seem, you’d be surprised how many men tend to act “alpha” and try to take control of the situation.

They show “their” unavailable girl their manly powers and try to sweep her of her feet.

But the truth is that most men don’t possess the capabilities to charm a girl who’s incapable of loving.

That reason is that her current relationship mentality is not appropriate for a serious relationship. It’s still processing pain, insecurities, and possibly even trust issues—and is still looking for ways to solve them.

Here are few possible reasons why a girl isn’t emotionally ready for a relationship yet:

When you’ve given the girl you like some space to breathe, you have to continue to avoid relationship/commitment topics and give her enough time for her to:

One way for you to help the girl invest in you is to confidently accept the friendzone and continue to be your best self. You needn’t be afraid that she’ll leave you, find someone else. and that you’ll lose her forever.

The truth is that she’s not even your partner right now, so try not to make it seem that you are.

Be the best version of yourself instead and behave selflessly. By doing so, you’ll free her from various requirements and obligations and consequently, allow her to feel as great as she can around you.

And once she’s processed her past and realized that you’re actually a decent person, her love and respect for you could potentially increase.

But for now, you have to appear secure and respect this person’s wishes.

How long could it take before she’s emotionally ready for a relationship?

Nobody really knows how long it could take a girl with a poor relationship mentality and commitment issues to naturally process everything.

It really depends on her coping mechanisms and on whether she’s working on herself. If she’s getting professional help and she’s strong enough to leave her past events behind, she might get over it in a matter of months.

She could accept her past, soften the pain, and gradually get over her fears.

But if she isn’t doing anything about it and she stopped caring about self-improvement, then it could take this girl a very long time to be vulnerable again. I have no idea how long it could take, but if I had to guess, I’d say at least a year.

She’d need to forget about her experiences with the help of time alone—as time does heal wounds. But after she’s healed, she’d be at great risk of regression.

Especially if her thoughts during the recovery period aren’t very positive. She could essentially carry on with a poor relationship mentality and enter a new relationship with poor willpower.

That’s why you can never put too much hope on a girl who’s not sure about herself and lacks the drive to grow. If she isn’t deliberately working on improving her thoughts and feelings, you may be better off finding someone who will.

Friends and benefits with a girl who won’t commit

She doesn’t want to hear any of that.

As we said before, it’s not about your feelings right now. It’s about hers—and she wants to keep it that way.

Besides, you’re not in a committed relationship with her so you need to behave that way too. Don’t guilt-trip her or do anything that forces her against her will.

When (and if) this girl gets attached to you, you will be the first to know about it. Your absence will affect her and she’ll want to spend more and more time with you.

Just make sure you don’t overinvest in this person because (as you now know) she may take her a very long time before she’s ready. And my guess is that you don’t want to stay hungry for her love forever.

You have a life of your own to live.

Moreover, she might eventually start dating another person (or a few) and that could make you feel insecure. So make sure you date this person with low expectations or you could end up seriously hurt.

Should you give up on a girl who can’t love you or has commitment issues?

I can’t decide for you and tell you exactly what to do, but I can give you some general advice that may come in useful.

That said, I see two options for you to choose from:

I hope this article’s given you some useful tips on how to deal with a girl who says she’s not emotionally ready for a relationship. If it did, I’d like to hear what your next step is. Comment below the post.